I’ve been in China now for a few months, almost six (dang), and it has been an adventure to say the least.

Not the sort of adventure I’m used to, mind you, where each day brings with an excitement and the mystery of “where will I end up? Who will I meet? I am SO excited to wake up this morning!”

Here, I know exactly where I’ll end up: hanging laundry on my tiny balcony while watching the terrifying driving choices being made on the streets below me as the evening haze of pollution settles over the city. And I know exactly who I’ll meet: the extremely elderly gentleman who’ll stare at my blonde hair and cat-call in Chinese as I walk by, the child who’ll go to the bathroom in the middle of the floor of the bullet train station, and the woman who will poke me in the eye with her umbrella as I focus on trying to avoid the gauntlet of spit puddles on the sidewalk. It’s different, it’s inexplicable, and as the locals here put it, “T.I.C., man!”

Yep, it’s been an adventure.

I am not a city girl. That isn’t to say I need to be surrounded by wilderness all of the time,  but if 99.9% of my life were like that, I’d be the happiest hick this side of the outback. Maybe it’s me, maybe my mind just can’t work as fast as it needs to in order to function like a normal person in this mad, mad environment. I feel kind of like Zach Braff in the majority of his roles (and I assume his life) – never quite completely in the game. Case in point:

Mr.Braff, I know exactly how you feel – this country does have a way of zipping past you while you stare googly-eyed at the haze that you assume are people, but could be anything really. The noise, the crowds, they all fade into the background eventually, and you’re left alone on the couch, wondering what the heck you’ve missed while trying to catch up.

But then, once in a while, this city can surprise you.

A few days ago I stumbled across a park, tucked safely away in a far corner of the city. It was 9am on a Thursday morning, a time when in my corner of Shenzhen you are either at work , or late and running. Nobody in my hood has time for a park at 9am. But this place was bustling.

As I wrote, I was sitting by a lake, listening to an old man play an Erhu, a type of Chinese violin, beneath the trees. As his haunting melody danced on the air there were a few gathered round listening, some meditating and swaying slowly to his tune. There was another old man doing Tai Chi in a little pagoda at the far end of the park, yet another trying to impress me by doing push-ups off of a boulder (I was impressed that he didn’t bust a hip). A family with small children sprayed the air with bubbles and ran around trying to catch them, and just around the corner around one-hundred couples gathered under a large bandstand to dance ballroom and traditional Chinese dances.

As I walked the pathway through the park I passed more people practising martial arts with swords and staffs, more Erhu serenades, an awesome duet between a violin and a trumpet, an older lady singing Chinese opera, and a group of 50 people or so belting out old hymns of the Chinese countryside to nobody in particular. It was like a little speck of paradise, not only for myself, but for the others I was sharing that bright, breezy morning with.

It felt like a miracle, but in a city of 17 million we had found community, a place to gather and slow our pace, existing only for the joy of the moment. For a few brief instances I felt free of tension, and started to think that maybe being in a city was not so bad after all. I may have even smiled. As the haunting melodies of the Erhu continued to pierce the bubble-filled sky, there was peace, and there was calm. Moments like these are precious few here, but they do exist.

The view from our balcony

The masses fleeing the city at night 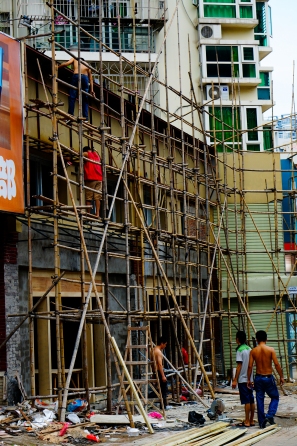 Bamboo (scaffolding), the most valuable material in China

An impromptu karaoke session on the sidewalk outside of the mall. There are no words for how much they LOVE karaoke here

People here are afraid of the sun, so a sunny day is almost more colorful than a rainy one as the umbrellas come out.

A typical Chinese tuktuk (3-wheeled cart). Notice the driver with his belly hanging out of his shirt (all men do this in the summer, rather than go topless), and the two passengers just perched on a bunch of boxes. No taxi? No problem; you can always find a ride in China

A laundry line: for drying your clothes, seaweed, veggies and sausage. 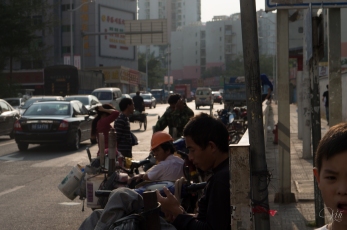 In China, everybody has one job. You do only one thing every day, but you do it well. These guys are drillers that hang out on their motorbikes on the street. So if you need a hole drilled then you come to this street and hire one of them. Then you hire another guy to do the next step. It can literally take 5 men here to install a laundry line. But they’ll do it well.

My FAVEORITE thing in China. These dumplings are filled with meat AND broth, then fried. I mean, what else is there?

This man is dressed like poo. Seriously. Ironically it’s for an ice cream shop, where the you can get soft serve in bowls shaped like toilets. The Chinese love poo, your phone even comes with emoticons of the stinky piles.