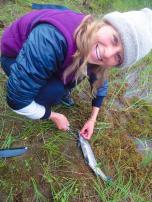 (learning to surf in Hawaii; abseiling in Mexico; gutting my first fish in the Yukon)

This has been my motto (without me even realizing it really) for a little over 2 years. And over those 2 years I have been travelling… a lot:  from the Native communities in Ontario and Quebec’s frigid north to the balmy beaches of Hawaii; across Canada with my family and on an expedition through the mountains and rivers of the Yukon Territory; living it up in Mexico and living it up (the extended version) in New Zealand. I’ve always been a traveller – I’ve been lucky like that – but even I acknowledge the fact that I’ve become somewhat of a nomad. A happy nomad, but a nomad nonetheless. For those of you who know me well, you know that about 2 years ago my life as I knew it completely fell apart, shattered into a million pieces. It was one of those moments when you know, for absolute certain, that nothing will ever be the same again. Everything changed, not in a bad way, just different. But I definitely learned to let go…and in letting go I found myself in some pretty unfamiliar places and situations. I figure in those times you have two options: pine for what you used to have and the life you loved, or embrace the fact that change is what makes life life, and that change does not mean that you’ve lost your old life, you’re simply building upon it. Pretty deep eh? Trust me, I know…I tried both of those options for a while, before finally settling on option #2. And along with that change the motto: try something new.

So that brings me to where I am now, which is in Shenzhen, China. I’m here for a year, exploring around and (hopefully) documenting it well.

Facebook was getting a bit crowded with all of my pics, and honestly, it was starting to be a bit tough navigating around all of those albums. Apparently when it comes to the camera I have something of a trigger finger. So I’m starting this blog, a site for all that; my photos, thoughts, stories of the every day mundane…who knows, maybe I’ll throw in a few recipes and witty jokes!

Feel free to comment and write things, particularly those of you whom I left behind and whom I miss terribly (that’s right you).

One Reply to “Try Something New”