If you would’ve asked me this time last year what I thought China would be like, I couldn’t have told you. I mean sure, I had known plenty of Chinese people, had many a stroll through various China towns, even shlurped me a bowlful of Chinese noodles (and not just the stuff they serve at the Mandarin). But I had no idea what a country as large and renowned as China would actually be like. And once we found out that this place would be quite a prominent part of our near future, Nic and I definitely studied up – read some books, learned how to say “hello,” and watched BBC’s Wild China, which is a spectacular show that I highly recommend even if the closest you plan to get to this country is the takeout place down the street.

The point is, we thought we had come somewhat prepared, strolling in all like, “we got this!”

It didn’t take us long to realize, however, that we did not have it…in fact we knew about as much as John Snow: NOTHING. Honestly, there is probably nothing, and I mean nothing, that could ever prepare you for the experience that is China. In the year that I have been here I have laughed hysterically, I have cried profusely, I have lashed out irrationally, and I have had more than a few mental breakdowns (and I only wish I was kidding). This is a country that has the power to inspire wonder and awe one moment, and knock you on your face the next. You will have days when you feel lucky to be here, and days when you wish you were anywhere else. I suppose this is true no matter where you travel: if you stay in one place long enough, you will not only see the great parts, but you’ll see a lot of the down and dirty stuff as well. It’s all part of the joy of the wander. And it is truly eye-opening.

That being said, it has definitely been an experience; not only being the tourist and sightseeing our way across the countryside, but being the local and spending of much of our time in Shenzhen – apparently not the golden city of China, according to the rest of the Chinese. It’s loud, it’s crowded, it’s smelly, the rats go swimming and the sewers overflow into the streets when it rains hard, and there is nothing cultural about it, being only 30 years old and all.

Despite that, it’s been home, and in all honesty a better experience than I probably would’ve gotten living in the more laowai (foreigner/amateur) neighborhoods in Shangahi or Beijing. Shenzhen, being so new, was definitely more of a raw deal: everything is still very old China, from the baby bums to drying sausages from trees in the parks to rats everywhere to nasty garbage FILLED streets. It is definitely not as clean-cut as its northern cousins. This is the place where those items that are “Made in China” are made, so it’s very much an industrial-type city. But you know what? Spend a few months here and it kind of grows on you, to the point where you will be sitting in a fancy coffee shop in downtown Shanghai missing your somewhat grittier neighborhood in Shenzhen. I like the fact that very few people speak English, that street food is more prominent here than in any other city I’ve seen in China, and you can enjoy it while sitting at greasy tables in the middle of the sidewalk while cars weave around you (on the sidewalk) honking profusely, as if you’re in their way. Something about it is very honest; very “we don’t really care what you think, we’re going to do it anyway.” It feels like a different world, which is why we came here in the first place.

So in honor of our year in China, and more specifically, Shenzhen, this is a post dedicated to the best of the city, in my opinion. Truth be told, if you ever do come to China, avoid this city. This is not a touristy, everything-is-so-old-and-awesome-kind-of-place.  Like I said, it’s loud, it smells, and you’ll be hard-pressed to find any buildings or temples or traditional culture.

But if you do happen to find yourself here, this is why it’s awesome:

The Top Ten of Shenzhen

(in no particular order)

1) The food on the streets

I don’t know about you, but an upright dumpling definitely makes my heart tremble. Anything wrapped in dumpling or bready and steamed really, that’s my jam.

During the colder winter months, this was my absolute favorite thing about walking to work: strolling through clouds of steam rising from the different carts set up on the streets – frying noodles, steaming jiao-zi (JIAO – TSE: dumplings) and bao-zi (BAO – TSE: buns filled with awesome)…basically every incredible Chinese food that you could dream of you could find somewhere in the early morning streets.

There hasn’t been anything I have bought and eaten from the street-food vendors that I haven’t loved. Although I have also never tried the stinky tofu (actual name), or never been able to get close enough to try it. If you took a pair of sweaty socks, stuffed them with blue cheese and limburger and then rubbed them in your armpits, you’d have made a similar smell. Although I’m told by the locals that it is fantastic, and they do know good food. If you’re brave enough to try it, let me know how it is.

2) The food off the streets

If street food isn’t your thing (and I understand, we definitely found out how questionable it can be during our time here with a bout of the travellers tummy), then never fear! The food not sold from greasy carts is equally as tasty, and probably subjected to a higher level of quality control. The streets are basically lined with restaurants, all serving some measure of Chinese food (oh, and McDonald’s of course), and again, I have yet to find a bad one. They’ve also got pictures on some of the menus, which makes it easier to determine whether you’re ordering lamb (yang rou) or a sheep’s…y’know. In a country like China where no meat is off limits, it never hurts to be careful if chicken feet aren’t your thing. 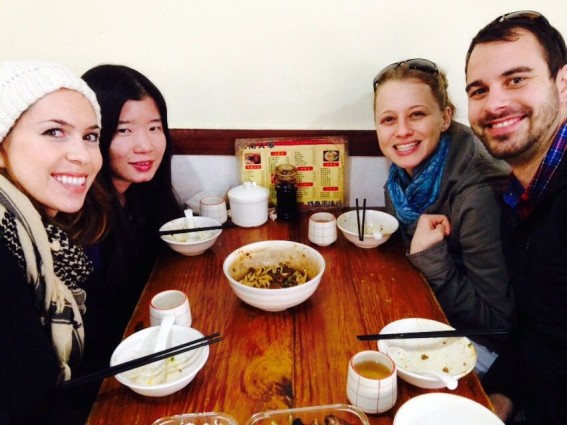 Although sometimes hard to find, these fellahs are in every Chinese city I’ve been to, taking their birds (usually white-eyes) to the parks and hanging them from the trees so they can socialize with one another (the men and the birds). It’s such a beautiful sight, and for once the air is filled with birdsong rather than bullhorns, loud Chinese pop music and yelling, which is always awesome. 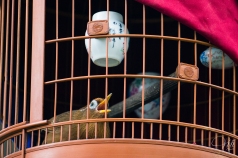 In order to pump themselves up before a big day of work, some of the larger Chinese establishments, particularly those in the service industry, will gather on the streets in front of their businesses and do a team-building session. This happens all throughout the day, when rows of employees line up and chant, dance, do the Macarena…whatever they need to do to get themselves into the zone. It’s always a great show, but would probably be better with popcorn. 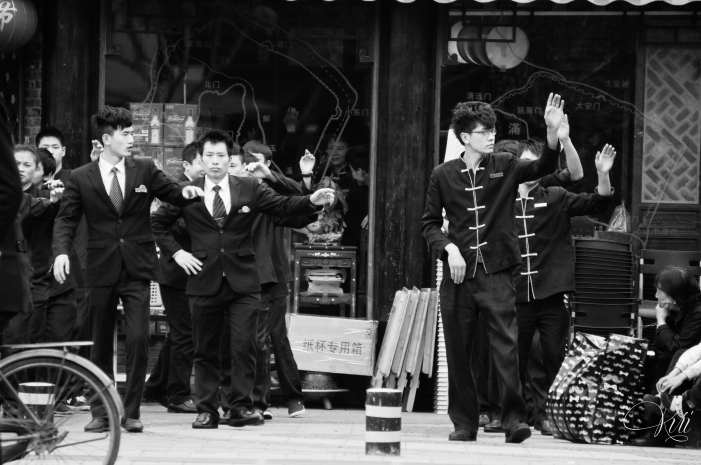 The streets here are everybody’s playground, especially in our area where there are no parks. So every night in one of the larger sections of sidewalks, around 40 individuals, (few men, some young, but mostly older women), gather to dance to some traditional melodies in a line-dance fashion. It’s impressively coordinated, and in a city as large and impersonal as this, gives an awesome feeling of community and closeness. Plus it’s beautiful to watch, and beats the heck out of going to the gym!

I’ve had many bad days, and bad weeks since we’ve come here. The stress of living in a city was already too much, but a city whose population is half that of my home country can sometimes wear a gal thin. But no matter how bad things got, China always seems to know when I need a pick-me-up, and sends some sort of funny sign, or tshirt my way to make me smile. It happens when you least expect it, but it just gets you every time.

These guys get their own number, because they are ah-mazing! The noodles here are inexplicably good, and made from everything under the sun, which makes it easier for those who are anti-wheat. Handmade ones are super popular – thick and chewy or tiny and thin – and are super fun to watch being pulled, twirled or chopped. If it weren’t for the bao-zi  or those upright dumplings, I’d be a noodle-gal all the way. 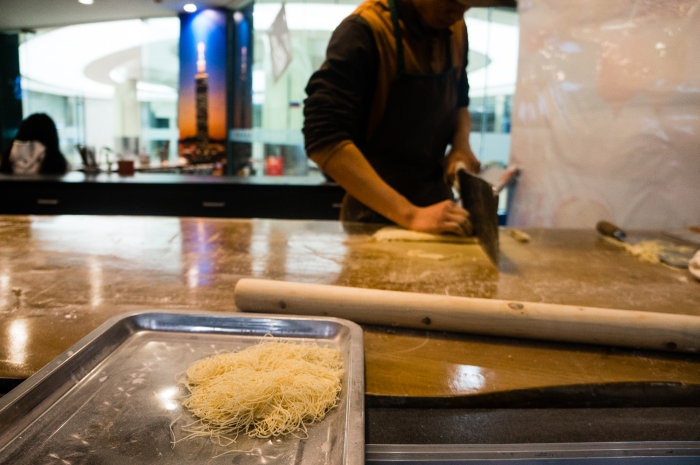 That’s right, more food! We discovered these while stranded in Rilong for Chinese New Year, and they…are…incredible! Like little vanilla clouds that dissolve on your tongue. True story. We tracked them down and bought a giant box as soon as we got home, which I promptly dumped on the floor and made a cake angel in. Because that’s how much I love them.

I’m not talking crazy flashing streets lights like the Vegas strip, although the majority of the city is definitely filled with those. The lights I love are the more personal decorations: strung up Christmas lights and paper lanterns, usually in some shade of red or white. Red is the color of luck and prosperity, so around almost every holiday (and they celebrate quite a few in this country), the gardens of our building and throughout the city would be strewn with beautiful arrays of paper lanterns. Gorgeous every time. 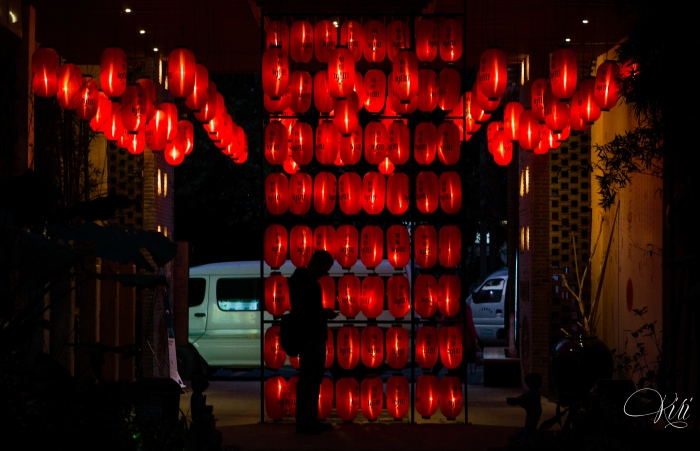 These did not make the list until about a month ago, when the rainy season finally hit Shenzhen with a vengeance. Shenzhen is in a great area; there are no earthquakes or tsunamis or hurricanes…but what they do get here are monsoons: insanely heavy rains falling for a short period of time that not only cause mass flooding within minutes (as the sewers and rivers overflow), but wreak havoc on a city that absolutely refuses to slow down. This was one of the only times in our year that I was grateful to have an apartment overlooking a major street. Cars were stuck in 4 feet of water, and still others tried to drive through…a portrait of a city in which people do first, think later. I don’t think they were enjoying it much.

On foot, however, we were LOVING those streets: rivers flowing down the main laneways, legitimately fast and dangerous, flipflops floating every which way, sandbags around all the major banks. It was an experience walking them, and slightly risky, which of course for us was the time we chose to go to McDonalds…because just like our fellow countrymen, no storm’s going to keep us away from those Double Cheeseburgers.

This is honorary for a few reasons: first, eleven didn’t rhyme with Shenzhen; and second, it’s more of an across China thing, but one of my favorite hobbies. Like most cities in Europe, China is not without its parks and squares, where people congregate en masse to enjoy balmy evenings and lazy Sundays, and just do whatever they’d like to do. There is always dancing or tai chi, there are always old men deep in thought, and there are always bubbles, which just make me incredibly happy at any time. Of all the moments we enjoyed in this country, the times we just sat in a square and observed were probably my happiest, and made for some great shots too.

One Reply to “An Upright Dumpling”