When I was growing up, there was a restaurant called the Mandarin not far from my house. As children, it was definitely one of our favorites. This restaurant was the epitome of Chinese food as we knew it: chicken balls, lemon chicken, mashed potatoes, pizza – sushi served and replenished by charming young Chinese blokes named “Hank” or “Frederick.” Authentic, right? It was as close to China as I ever got, and me being young and naïve I enjoyed it. So of course when I moved here, I was expecting to meet Hank again and find out his secret recipe for lemon chicken.  He wasn’t here. Nor could I find Frederick. And they must’ve heard I was coming and hid the lemon chicken, because I haven’t found any of that either! Now, having actually been to China, there are a few things I’ve noticed:

1) There are no (and I mean no) chicken balls in all of China…I don’t know who invented them, but it was not the Chinese. Mashed potatoes are suspiciously absent as well. What they do have are incredible noodles, dumplings and pork dishes, which definitely blow any Chinese food you grew up with out of the water! Unless you grew up in China of course.

2) I have yet to meet Hank or Frederick. Many choose their English names when they are first learning English at a young age, so I have met a few “Cherry’s”, “Tiger’s” and “Firetruck’s” (true story), but Hanks and Fredericks? I mean, would you choose those names at 6 years old when “Terminator” is also an option?

Nevertheless, before my current year of enlightenment, I thought the Mandarin was a pretty legit place. It was our go-to for birthdays and get-togethers throughout the year, even a few funerals too. But my favorite time was always during the Chinese New Year, when prices would go up and crab legs would be added to the all-you-can-eat buffet, making it seem all the more fancy to young, excited me. I never even ate the crab legs; it was just nice to know that they were there. It was a celebration, and rightly so, as for the Chinese their New Year is their Christmas: the end-of-the-year celebration where all things stop for a few weeks and families come together for food, fun and fireworks.

So needless to say that has been my ultimate goal since we came here: to experience the Chinese New Year, truly experience it, and see if the country could do it as well as the Mandarin. After all, those were some big shoes to fill! Thus, in true Nic and Duckie fashion, we decided to celebrate like the locals and flee the city, going to the most remote village we could reasonably get to in a few days. Rilong.

Rilong is a tiny village near the Tibetan border, located a very bumpy 5 hour drive out of Chengdu: home of the Panda bear and capital of the Sichuan province. Getting there took a few days of flying, hitching rides in shady looking cars driven by shady looking dudes, and crossing mountains; but the result was well worth it. The village was deserted, the usual hordes of tourists having horded back to their own villages for the New Year, and we ended up being the only patrons in the only hostel open for the season. Yes.

Our original plan was to backpack nearby Mount Siguniang, hiking into the valley and summiting what we could over a few days. After all, that was the reason that we had hauled ourselves out there in the first place. However, upon arrival we were informed that they don’t trust us to not die in the mountains, and we couldn’t go in without an escort. Heaven knows we tried:

US: “But we’re professional guides! We hike and camp for a living!”

RILONG-IANS: “Not without a local guide – you could get lost in the very visible valley floor which has a well-travelled path and is not very long.”

It was no use… those locals were about as immovable as the mountains from which we were barred.

So after a few moments down on our knees crying to the heavens (we’re pretty dramatic) we finally conceded defeat, and moped back to our hostel room to cry in private.

I’m not gonna lie – looking back, it was a tragic few moments. We wanted to hike dangit, and had been deprived of the wilderness for far too long. Call us crazy, but we were desperate to just forgo bathing for a few days and sleep on the ground. Now we were stuck in a tiny little village near the edge of China, staring at the mountains from afar and dreaming of what it must be like to be free. *Sigh*

It ended up being, however, an interesting holiday. Being alone and defeated in a tiny mountain village, we were taken pity on by the owners of the hostel, and were invited to their family’s Chinese New Year celebration. It was a few days consisting of incredible food (yak milk tea anyone?)…

And tons of fun… 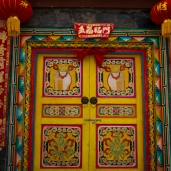 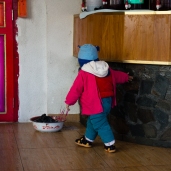 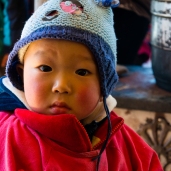 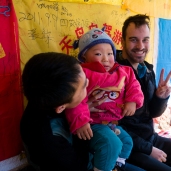 And more fireworks than you can even begin to imagine.

No matter where you are in China, for the two weeks of Chinese New Year the fireworks are constant. And I don’t mean simply the fancy colorful ones we have back home. The majority of these fireworks are red rings of noisemakers (red is the luckiest color), set off in the streets, the back alleys, off of balconies, and even aimed at one another in ‘friendly’ street wars. We watched a few six-year-old children shooting them at each other in the alleyways while their grandparents cheered them on. Just one of those moments when you stop and think, where the heck am I? But then again, those moments are not a rare thing in China. 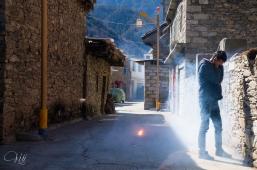 Needless to say, it was an awesome time, but still left us restless. Thankfully, once the festivities died down a bit and the dueling fireworks had a momentary ceasefire, we were finally able to escape (sans guide – take that Rilong) and hid with some cows in a pasture on a nearby mountainside. Desperate times. But we stayed there, exploring the mountains by day, hiding out by night, and enjoying some of the peace and quiet that is more of a novelty in China than you can even imagine. Minus the constant sound of gunpowder ignition of course, but after living in the loudest city known to man for the past year, a few fireworks are fairly easy to tune out. 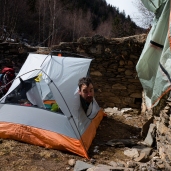 So there you have it, Chinese New Year, Chinese style, in a Chinese village. If you ever find yourself in this part of the world during this time of year, do yourself a favor and don’t flee the country in fear with the rest of the foreigners. Find yourself a quiet spot somewhere in the mountains, befriend yourself a beautiful family, and experience the season like a local. You’ll be happy you did. They may not lemon their chicken, but they definitely still know how to party…

I’d dare say it’s even better than the Mandarin.

And if Hank was here with us, I’m sure he would agree.

Selling food on the mountaintop

Prayer flags on the mountain pass

Remnants of the party 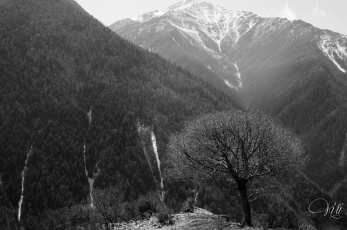 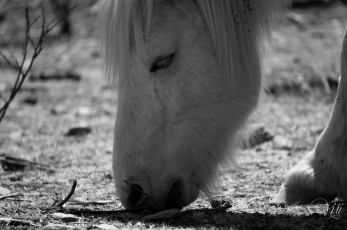 Getting right in there

Keep off the what now? 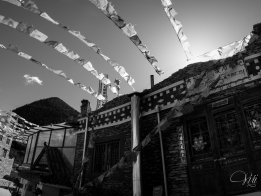 One Reply to “As Close To Tibet As We Get”